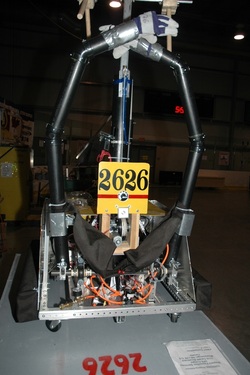 The robots had to turn most of the playing surface as possible by moving large balls. The robots started on the back wall (the alliance of all red and blue alliance of the whole) of the game playing surface was divided in half lengthwise by a bridge, called Overpass, six feet and a half high. Each alliance had two balloons were positioned randomly at the beginning of each game. The robots must be built strong enough to be able to withstand the drop ball possible. During hybrid mode, if the robot was able to move a ball, are harvested alliance bonus points. When the pilot took control, they had to move the ball around the playing surface, or by pushing them or taking them. Every ball that was passed under the bridge gave 2 points. By cons, each ball pass over the bridge gave 8 points. 20 bonus points could be earned if at the end of the match, the robot managed to put the ball on top of the bridge and remained in position, because the other robots were able to drop it. For a more detailed description, see the official video reveal.