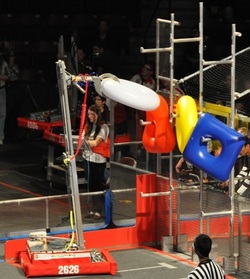 The robot had to take tubes which form the logo of FIRST (a triangle, a circle and a square) and hang them on posts disposed at three different heights. On the autnomous mode, robots had to place a tube on a post. When a form was attached to the third level, the team won three points. When a tube was attached to the second level, the team won two points and when they hang it on the first level, the team won only one point. When an alliance completed a FIRST logo in the right order (triangle-circle-square), it doubled the points of each tube forming the FIRST logo. The points were double again if one of the tubes was placed in the autonomous mode. At the end of the game, robots were allowed to earn bonus points by deploying a minibot on a tower. The first minibot to reach the top of the tower made his owner win 30 points if 1st, 20 points if 2nd, 15 points if third, and the last minibot had a 10 points bonus. For a more detailed description, see the official video reveal.