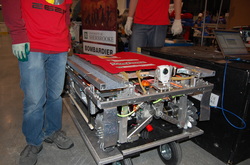 The robot had to kick soccer balls into one of the two goals which were placed at each corner of the field. The playing area was divided into three parts by a bar that robots could either pass under (in 3 holes designed for this purpose) or over. The robots had to launch balls and were not allowed to move with the balls. They also had to protect their goals from the other team, who were each composed of three robots. At the end of the match, the robots can go hang on structures located in the media moguls. Points are given as follows: 1 point when a ball entered the goal, 2 points when the robot managed to hang on the structure, and 3 points when a robot hung on another robot. For a more detailed description, see the official video reveal.