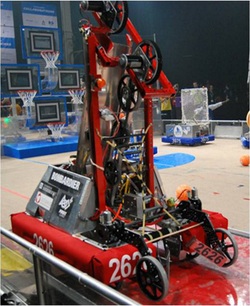 This year, the robot has to play basketball. To score points, robots must shoot basketballs into one of the four baskets located at the end of the field. The baskets are divided into three differents heights: one basket is placed at 28 in. high, two are placed at 56 in. high and the top basket is at 98 in. from the floor. Points are distributed as follows: 3 points for scoring in the top basket, 2 points for scoring in the middle ones and 1 point for scoring in the bottom basket. 3 points are added to each ball entering the basket in the autonomous mode, in which the robot isn’t piloted by a player and hence must move on it’s own. This year, an important modification has been made to the autonomous mode: teams have the possibility to use a Xbox Kinect to control their robot, though only one team per alliance (composed by 3 teams) will have the opportunity to lead their robot with the Kinect. The playing surface is divided in two by a 4 in. tall by 6 in. wide metal bar called “the barrier”. In order to cross the barrier, three bridges have been installed. One red bridge which can be used by the red alliance, one blue bridge which can be used by the blue alliance and one white bridge available for both alliances. The bridges are placed 12 in. above the ground. Robots may set the bridge at an angle in order to pass over it. The robots can also cross the field by passing over the barrier. In the last 15 seconds of the match, the robots have the chance to earn extra points if they manage to keep their balance on a bridge (of their alliance). Multiple robots may balance on one unique bridge giving even more extra points for the successful alliance. Points of cooperation are given if two robots coming from opposite alliances balance on the white bridge. For a more detailed description, see the official video reveal.