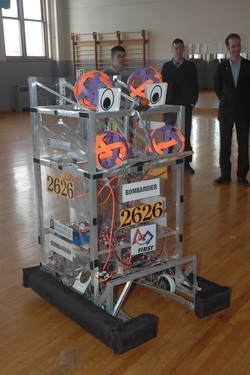 This year the competition was played on a slippery surface, akin to the surface of the moon. The robots had to have wheels were adherent to the surface while applying the least possible pressure. At the back of each robot, a trailer was attached. The goal was to launch different types of balls (Empty Cell, Cell and Super Moon Rock) in the opposing robot's trailer. Participants could also throw balls into trailers. Early in the game, the robot starts with 7 Moon Rocks in their possession in a basket located on the robot. Robots could pick up the balls that were not entered into the trailer and send them to their teammates. They could also be a tool to equip a team member and place a balloon over the robot to go put it in a trailer side. During the game, the balls additional types Moon and Empty Cell Rock could be exchanged against bullets Super Cell. During the last 20 seconds of the game, team members and / or robots could launch these balls into trailers to earn extra points. Bullets and Moon Rock Empty Cell worth 2 points each and Super Cell balls were worth 15 points each. For a more detailed description, see the official video reveal.